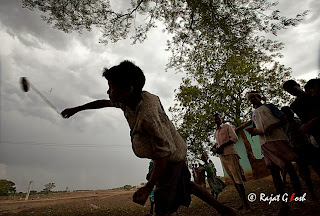 We were working on a documentary on a lost sport of the tribal of Jharkhand, we made a movie with them, a short 5-minute piece with Arun, which incidentally we tried to monetize by showing to various TV channels and a certain TV channel showed interest in the story.

They seemed to like the movie, and we were asked to make another cut of the movie, for 10 minutes, we went on to do so. We were called in by another executive of the channel to show the piece and were told we would be called again for another final meeting. These meetings also made the hopes of these tribal soar, they presumed they will get some exposure if this program was aired and there lives and there traditional sport was showcased, they hoped they will get called to show there skills in the sports and have a better life if this sport was again revived, We worked for a few weeks got another segment ready, n then the waiting games started, we were called to Delhi, but then once there, the trail mysteriously went cold.

The Design and Consult Operations Head, was more interested in meeting girls then in seeing the episode.  So here we are in Delhi hoping that the show can be made into a longer piece which hopefully could go on to help the tribal who are usually reserved and hate outsiders coming into there lot, I can see why, when men can only think what’s between there legs, how can the blood ever reach there brain for them to actually see things for what they are.  DISCOVERY FOR ME HOW THE BRAIN WORKS FOR CERTAIN MEN ( AND WOMEN)
Posted by RajatGhosh at 8:11 PM