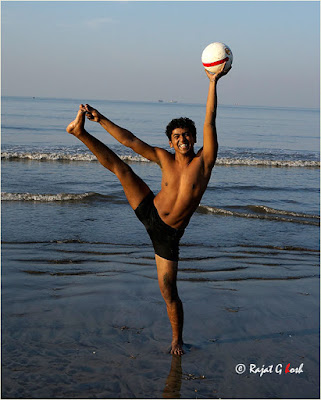 After enjoying Holi we were doing the goodbyes as the Varun devta made a appearance and the door slammed behind us the hosts were locked out of the house.

After the blame game, we descended 22 floors to get a key maker, found one  aptly named :
Raju Keymaker
And he came home tried for 5 minutes to open the door,  announced he would be charging us Rs 2500 to open the door,  Being in a fix we kept quiet and he was at it, trying to jimmy the lock not open it with a key, went on for 20 minutes before we thought of calling another key maker, panic time for him as he heard us talk -
He claimed the other guy was his brother, and if he could not open the lock , what good was his brother, another 15 minutes go by, before we call Salim  the key maker ,
N LO peresto , he got it open in 5 minutes flat

Trying to take advantage of people in dire straits is the loser habit, also called making a fast buck or cheating  legally. Guess what Mr Raju , you hopefully learnt a lesson on How not to cheat. If you want to be there for the long run.
Posted by RajatGhosh at 7:01 PM