26th Morning we were on the road and as planned by 0700 hours with a 0645 saddle up, and had hit the road, Looking for Bhagwati Yellapur highway, which involved riding through the jungles, lovely tree lined road, and a absolute pleasure to ride through, 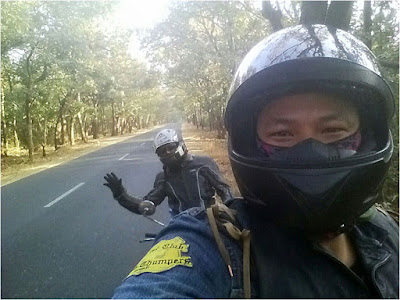 very invigorating for the soul and a pleasure to the eye, Some of the  boys who rode through this part at night and missed the sight.

We did a breakfast stop of Eggs and chips and water at a small village called KARKKATTA at 1030 is, with OD 4524
The villagers were curious about shyamal, speaking Marathi with his Green hair and Non Indian looks, the store owner was a old old man, who had a hard time understanding about double egg omelet, but sure whipped up a wonderful omelet finally, spicy and yummy. 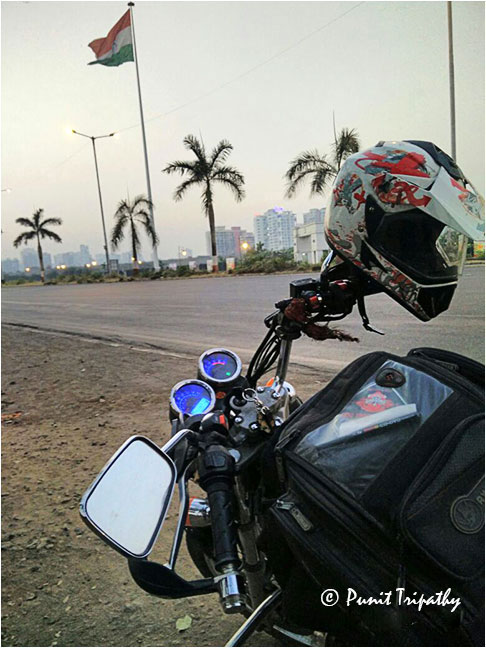 The day was 26th Jan, and some of the villages on the way had parades happening, which slowed us down and treated us to the march-past as school students celebrated the Republic day and many a smile on the way as we rode somehow we get mistaken for army commandoes (maybe it is the bike : bullet and protective gear we wear) 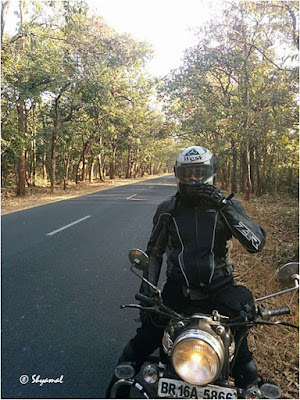 A wonderful day of riding, till suddenly my bike stalled, the bike spluttered and came to a stop, no power from the battery The older classic bikes will not operate if the battery is not giving power, and we feared the worst, in the middle of a jungle with lovely scenery but  no mechanics to help, ( so we thought)

“ When God shows you the way, you don’t need to see the whole staircase, (but still get your bike checked dude) rang in my ears as I cursed my mechanic who had worked on the electrical last, at santacruz, while fitting the LED lights, was it his fault, did he screw up the connections? Or what was it?
We pulled over and started to check fuse and connections and inform the IT guys of the happening,
As we waited on the side of the road, some friendly riders headed to RM from Chandigarh, Bean Mandy , Gagan and TJ from Road Survivors 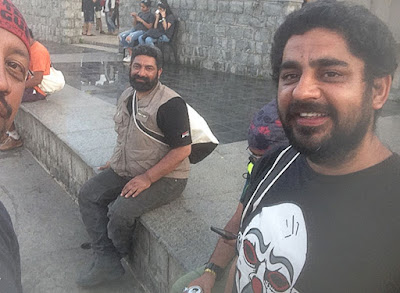 stopped by and helped with tinkering and giving the battery a jump. The battery was plain Dead and Unfortunately they did not have a battery to spare. Shyamals bike too did not have a working battery we were 70 km short of Gokarna at this point
But my bike battery had totally died and there was no way out,

A bunch of riders to RM did cross us giving us a thumbs up, am not sure what that was for, but bless them, and there intellect “

And now luck struck us - A Good Samaritan, Mr. Mahesh rode up and offered to help.  As he tinkered with the bike, he had no idea what was on, but had information, about a Yamaha Garage 12 KM back at Gullapur, ( we were at village  Mulemane)  where a new battery could be purchased, he did make some calls, and found out the mechanic at the garage was getting to leave for lunch, so he had us hurry, he gave me a ride to the garage – buy the battery
And back, (am sure shamal was cursing his luck to be stuck in the middle of nowhere with perfect roads beckoning him and his trailblazer bike) sorry dude and a Big thank you for waiting on.

Purchase made, battery installed but still the bike would not start up, no matter what we tried, Maybe while we were tinkering, we had managed to disconnect the wrong wires, as we struggled another bullet was riding by, n the rider was watching us, I did motion to him to stop, he obliged, he had purchased a fish and was headed home for lunch with his family, but like we find only in India, he spend time helping us, as luck would have it, he was a bullet mechanic, he did try and managed to sort out the trouble, n we were off again, a stop of around 75 minutes to get it all sorted,  once again bike fixed and we  were on our way. The mechanic wanted the dead battery don’t know why, but I was happy to give his that, he wanted no money, neither the good man Mahesh.  Maybe that’s why we ride a motorbike and experience these wonderful people along the way, who give us faith that the world is not all doomed. 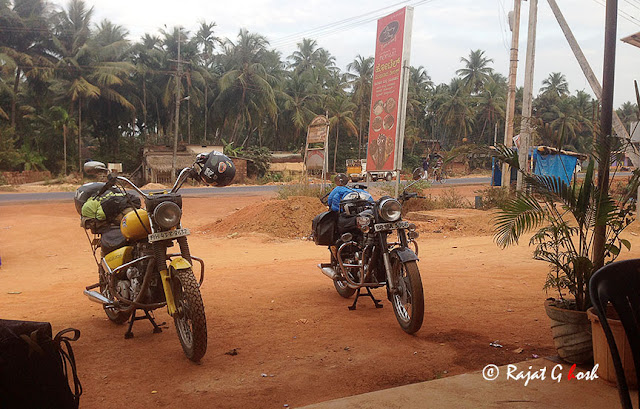 at Shiralle at 1755 hours, OD 4714 we were famished for sure, Food in belly was need of the hour
More chicken, more rice and lime soda later we were ready to hit the road BUT
Post lunch it was dark, my bike had no working headlights and Shyamals bike had weak headlights,
There I was following his taillights, and we rode like this the last stretch with other bikes roaring by on the single lane highway, Adventure we came seeking and sure getting it in good measure.

Finally we spotted the regroup point Hotel Sunrise, where me met Bilal, Prashant and a few others who had reached before us, time 1930 hours OD: 4749. Time for a wash and relaxation for the day as we waited for the other riders to catch up, seems Puneet  and Sanpada boys had lost some time looking for us after they started out at 1400 hours, J A big shout out of Thanks to them. 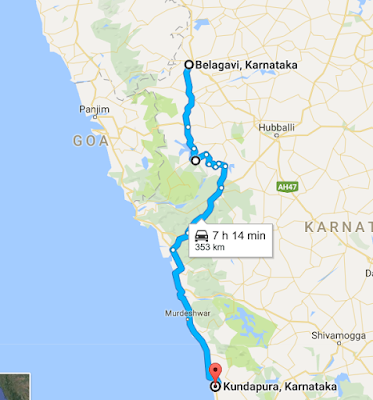 We had covered: 350 km this day.
And finally we rode to the final venue 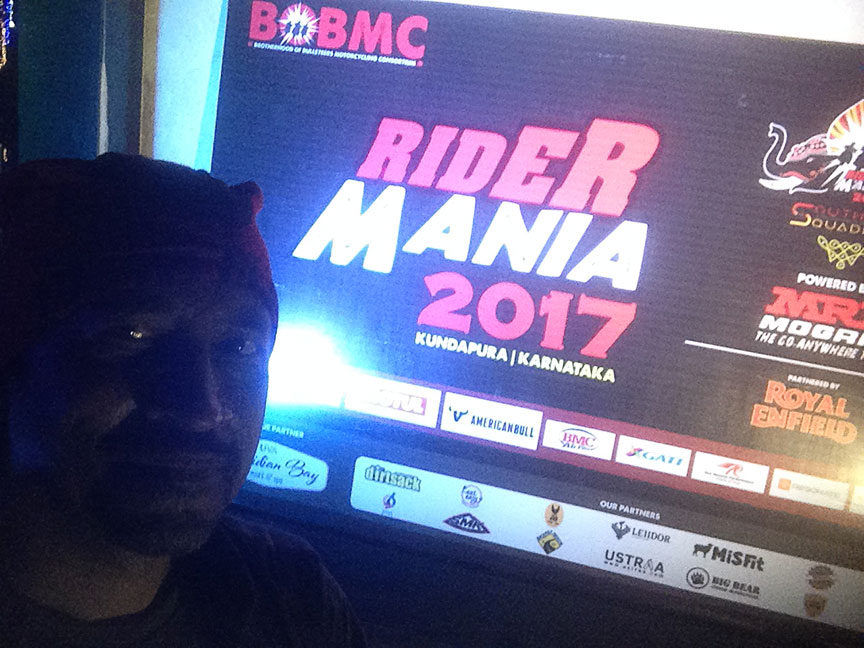 A wonderful property Meredian hotel / resort huge and sprawling and looked relaxing, The mayhem of arriving followed with bikes revved and honking and cacophony of noise to mark the ARRIVAL OF THE BIKERS at the venue. The meet and greet with some friends after an year, some we had met at last RM in 2016 at Nagpur.
Food and registration and tagging later we trooped to our  AC dorm, 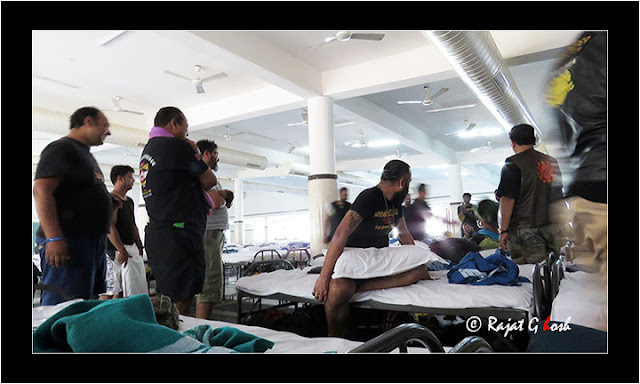 where we would be camping for 2 days, the clean sheets and beds were a treat to the eye after last years accommodation at the RM 2016 – oh well that was another story the tents and cold nights the shitty accommodation that made us stay up all night and dance the nights away  “ you give a biker the worst of situation and he will turn it into a gift from the world “   a film from last year of what  we had experienced last year,  (  RM2016 ) https://www.youtube.com/watch?v=_Y9cgd4L2IU&t=6s   and you might ask where is the bad in this, Where it was all Good.

Posted by RajatGhosh at 8:19 PM