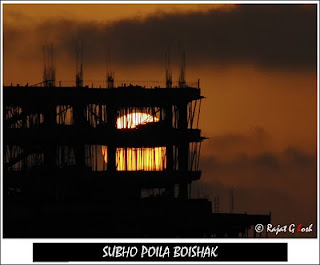 Under the Mughals, agricultural taxes were collected according to the Hijri calendar, which it does not coincide with the harvest. Farmers were hard-pressed to pay taxes out of season. To streamline tax collection, the Mughal Emperor Akbar ordered a reform of the calendar. Accordingly, Fatehullah Shirazi, a renowned scholar and astronomer, formulated the Bengali year on the basis of the Hijri lunar and Hindu solar calendars. The new Fasli San (agricultural year) was introduced on 10/11 March 1584, but was dated from Akbar's ascension to the throne in 1556. The new year was subsequently known as Bengali year.

Posted by RajatGhosh at 1:31 AM