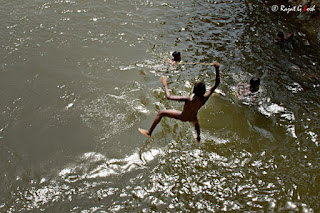 One hears about how great the city is, over and over, in the last 40 years I must have undertaken that journey to the city of joy 120 times + and not once has any train no matter where from I had started the journey ever been on time,

This time too as I started out wondering if I will be able to break the record? But no the south eastern railway true to colors made sure the record stayed intact, the Journey ended with the train being 30 minutes late, maybe that’s the reason why one always sees calcasians in a rush, they are always running, but never get anywhere.  I want to ask them where are they going in such a hurry, as no one ever seems to be working or doing anything, excepting the housewives.

Following the mad rush I too headed out of the station appearing very busy, once out of the station and spending 20 minutes to get a cab, I was off into the city, roads were not too crowded and I did see some more upcoming infrastructure development, they say a flyover takes 2 – 4 years to come up, well this one near Posta market has been there for 2 years, maybe another two years to full development.

In the city, I went to buy a hard drive at the Imagine store (they are the premium Apple resellers)

Over the Phone they had told me, they had G drives.  Once there they claimed they did not and it was not possible to get them in India, on informing them, RSG in Mumbai, which is also an Imagine store does offer them, they claimed it had to be an aftermarket product.   Not wanting to anger them (its hard to get anyone to work in the 1st place) I gave in.  Hiding my disappointment, I asked for a external hard rive, with 1-Terrabyte space the salesman got me one, when querying the price he quoted me a few thousand more then was marked on the drive, on pointing this out to him Pat came his reply - “ Oh I was thinking of another brand “ was his reply, was he trying to cheat or was he really not that sharp? I wondered.

Eventually I made my way to the apple service center, with my 1mac 20 inch, which has not been behaving it and seems to have a mind of its own when it should come on, and when it will go to sleep.
The service guys were sure I should not leave the machine behind, as they were scared the data might get lost.

Somehow I had a feeling they did not want to deal with the service part and they just wanted me to leave. .

On pointing out to them I was happy to sit there and back up my data, they refused to let me do that on their premises.   On asking why, their version was,” Oh we can’t let you do that, as we are not responsible for the data.  “ AGAIN I pointed out, no they were not I was, I just needed a power point, there point was: But we might have a rush all of a sudden in the store, (in the 30 minutes that had transpired that I was there, there was just One other guy who had made a appearance) I pointed out all of a sudden there might be a earthquake too or a Tsunami, so how about we wait till it happens.

Finally pushing my journalistic credentials to use and offering to do a story on their POV on these matters, they relented and were willing to let me work there. Magically the attitude changed.    NOW to wait and see how this chapter turns out?

Posted by RajatGhosh at 6:15 PM