To sela pass and Back


While we know the guys from Koderma and RKMC and Patna are attempting Tawang, since I had already made it to Tawang a few months back, I was not too keen to do it again,
maybe this is why

but the call of the mountain is hard to resist and as I connected with a rider from Delhi royal beasters, Nikhil who happened to be in Tawang  we decided OK lets meet at Sela pass, at a height of 15800 feet and then head back towards kaziranga.


The date was 5th November, and We started from Bomdilla, odometer 2526, we gassed up and we were off, reached Dirang at 0830 and had breakfast, 15 minutes later we were off towards Sela,

The road was picturesque as were the girls beautiful and friendly, happy to pose for us as we popped a few images with them and of them, along the way to Sela, the curved roads a pleasure to ride on and breathtaking view on both sides as we climbed quickly

we had encountered start of snow on the way making us put on our raincoat, the benefit was we were nice and warm the raincoat was great windbreaker too

we reached at 1145 and
Odometer read 3637 at SELA and sure enough Nikhil showed up riding from Tawang and we met for the first time, we would go on to ride for 5 days till Passighat together

A few cups of coffee at -5degrees at the BRO café and bonding over stories of how the RKMC guys were robbed a few km ahead of Sela of there lights  and some gear, and we thought there were no bad elements in the mountains ( sad but true robbers exists everywhere) 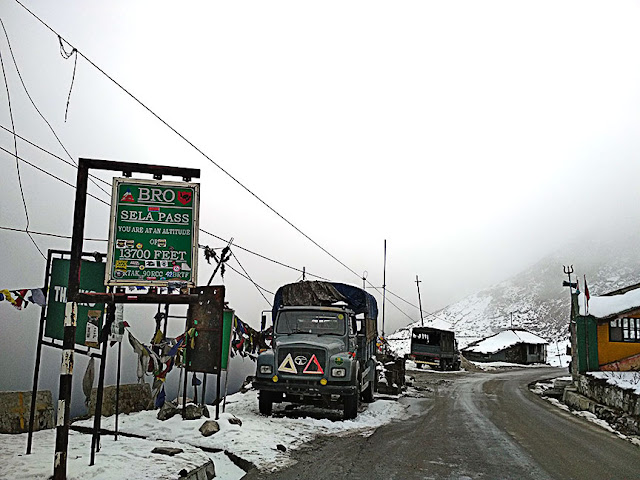 we started out descent back towards Dirang

Posted by RajatGhosh at 8:41 PM