Fishing in the rivers 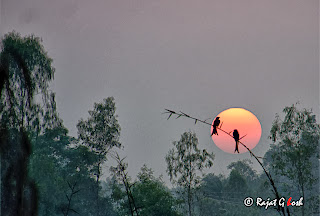 Posted by RajatGhosh at 6:37 AM No comments:

Arists at there biggest Exhibition 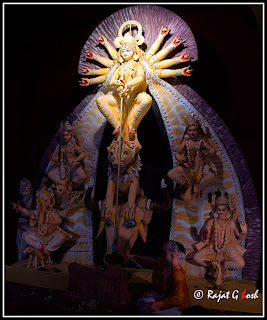 Artists and artisans from all over the country show off there skills with making idols which are more then the ordinary, using there artistic ability to bring the images to life with amazing clarity.

This is the big event, each idol is seen by a few million folks at the least, what better way to showcase ones skill then by attempting to “  creating the creator” as suggested by Anasue Mitter . 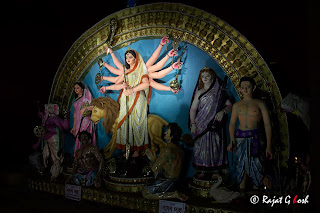 Posted by RajatGhosh at 1:11 AM No comments:

Happy Saptami ;) and Food for the Stomach 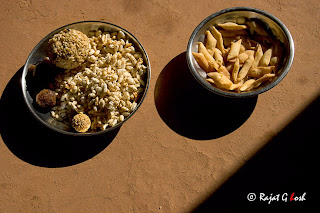 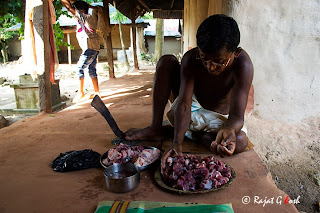 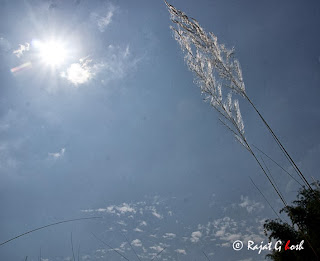 Dusshera is here when food and family are together, Food is mostly Mutton and Sweets of different kinds and ya Kaash Flower, and it livens up the countryside.

Posted by RajatGhosh at 5:32 AM No comments:

Gods and there accomplanying ones 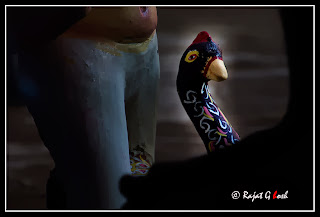 Animals accompany Gods, here we see Peacock being riden by Kartick the War God. Peacock are fearless fighters and also take on Snakes with there talons.

Godess Laxmi , is with an OWL - she is sober and tranquil and dignified.

Godess Swaraswati, is with Swan, as it can disern truth from the other , just like the swan can seperate milk from Water

Godess Durga is with the Lion, as he is the king of the animal World.

Posted by RajatGhosh at 2:05 AM No comments: 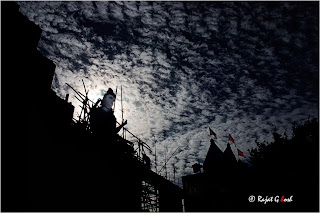 fo
Posted by RajatGhosh at 10:37 PM No comments: 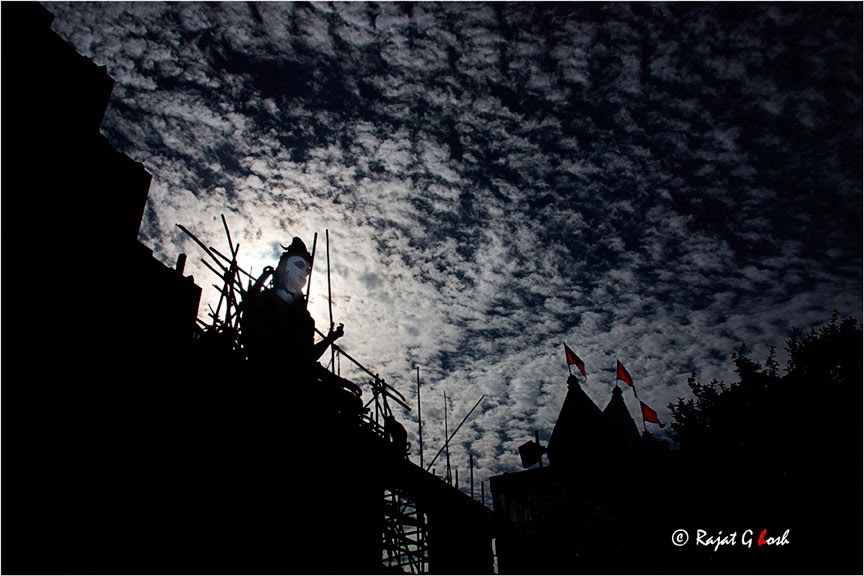 fo
Posted by RajatGhosh at 10:32 PM No comments:

Durga Prepares for the journey 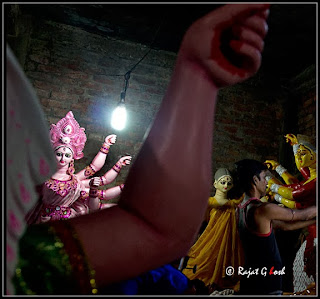 
Durga Puja is widely celebrated in the Indian states of Assam, Bihar, Jharkhand, Manipur, Odisha, Tripura and West Bengal, where iIn West Bengal and Tripura, which has a majority of Bengali Hindus, it is the biggest festival of the year. Not only is it the biggest Hindu festival celebrated throughout the state, it is also the most significant socio-cultural event in Bengali Hindu society. Apart from eastern India, Durga Puja is also celebrated in. Durga Puja is also celebrated as a major festival in Nepal and in Bangladesh all over the places of Dhaka, Chittagong, Khulna, Sylhet, Rajshahi, Rangpur, Bogra and other major places and all the villages of Bangladesh where the 20% population is Hindu.3-day National Holiday is being declared and most of the educational institutions remain closed as it is one of the major national festival also in Bangladesh which is widely celebrated and people from all religion participate in the program. Nowadays, many diaspora Bengali cultural organisations arrange for Durgotsab in countries such as the United States, Canada,,,
The prominence of Durga Puja increased gradually during the British Raj in Bengal. After the Hindu reformists identified Durga with India, she became an icon for the Indian independence movement In the first quarter of the 20th century, the tradition of Baroyari or Community Puja was popularised due to this. After independence, Durga Puja became one of the largest celebrated festivals in the whole world.

Ganesh The little elephant headed one 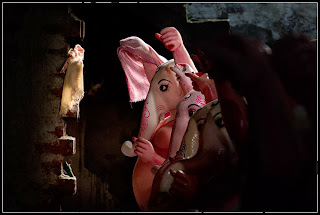 Mythological anecdotes of  Ganesha's elephant head makes him easy to identify,  worshipped as the lord of beginnings and as the lord of obstacles, the patron of arts and sciences, and the god of intellect and wisdom.

While Ganesha is popularly considered to be the son of Shiva and Parvati,

Annecdotes:
Once there was a competition between Ganesha and his brother as to see who could circle the 3 words fastest,  and  win the fruit of knowledge. Skanda went off on a journey to cover the three worlds while Ganesha simply circumambulated his parents. When asked why he did so, he answered that his parents Shiva and Parvati constituted the three worlds and was thus given the fruit of knowledge.

Many stories, which explain how Ganesha obtained his Elephant head. Often, the origin of this particular attribute is to be found in the same anecdotes which tell about his birth. The stories also reveal the origins of the enormous popularity of his cult. Devotees sometimes interpret his elephant head as indicating intelligence, discriminative power, fidelity, or other attributes thought to be had by elephants. The large elephant ears are said to denote wisdom and the ability to listen to people who seek help.
Posted by RajatGhosh at 6:57 PM No comments: