Of Health and art


It is 0600 hours and I had read about an artist, Joyeeta Bose, painting a wall near my house (ok a few KM away) so my morning walk was to find the wall, and see the artwork for myself and being a café maybe I will get a cup of coffee too. 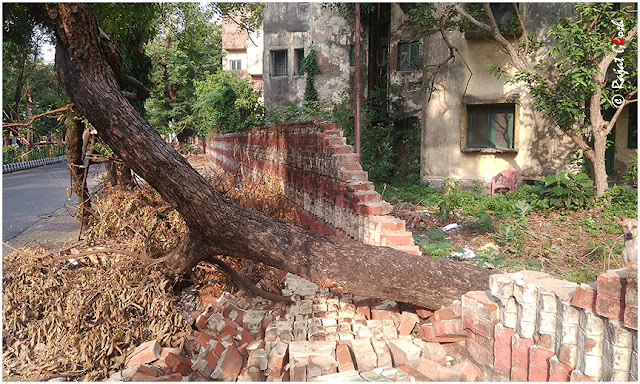 The previous night had seen a small storm and navigating around a few broken walls and trees, of saltlake I hoof it along, and 3000 steps later ( yes I own a pedometer in my Phone)    not having discovered the art and not willing to ask for direction (I am a Man you see)  I take a selfie to prove I was there, ( I know I know its vain and childish  )

I take a circular route to return back, when I see the café,
Lovely to see it in person 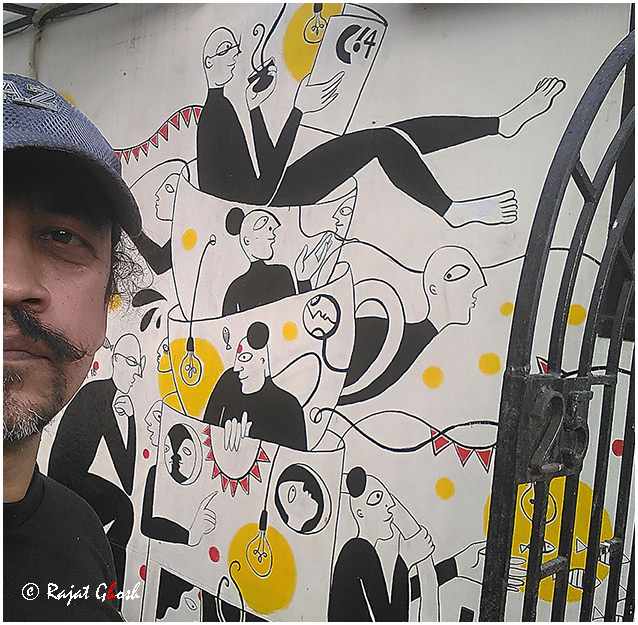 Being India 0630 is too early for the café to be open, Cal-64 it is called) but spending some time taking in the art, and a selfie later I am happy to walk off to a local tea store, that I have been visiting in this locality for over 10 years and a smile is all that’s exchanged with the lady who runs the store (more a shack) before I head home. 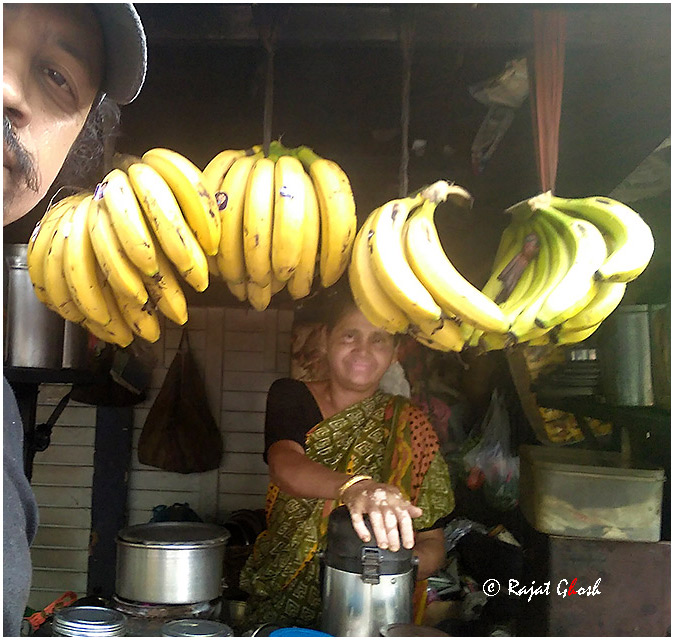 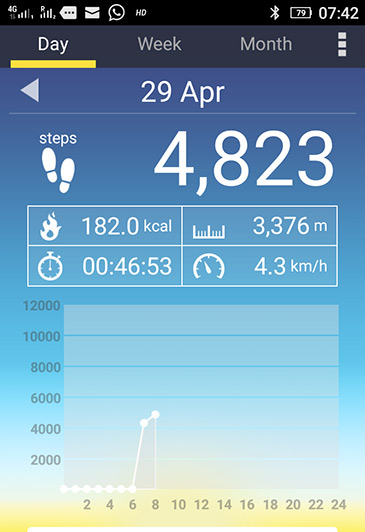 So today I became a troll( maybe) , just had to, seems Ms. Funnybones (Twinkle Khanna) who seemed a descent human being, intelligent and all that,  is auctioning off a uniform of the navy, for charity, really you are auctioning off something that has to be earned by capability, and does not belong to you,  who you think will buy a uniform for Rs 5 million?   Maybe she has pressing needs that I know not about, How about you wear the uniform once MS Funnyboones and walk the streets, look at the honor and salute you get from every indian as you walk the streets, it is the uniform they notice not you, then see if you still want to sell your nations honor !   I hear her husband adores her as he should, maybe he can explain things with love to her, why she should not do this.
Posted by RajatGhosh at 7:47 PM No comments:

Where are those days of Innocence in our educated life? 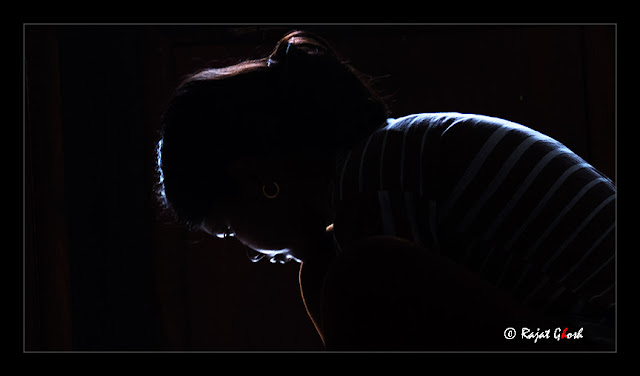 There is this girl who is a help to my mother, from a village nearby

When I thank her for making me a cup of coffee she laughs and says why do you keep saying thank you, frustrated at my propriety and words of appreciation that she feels is no not needed (remember the film – meine Pyar Kiya? No thank you, no Sorry?  I line often echoed by my riding mates )

Complement her on a dish well made in the meal her reply
She:  I know it is well made
ME: how do you know?  (I hear arrogance)
She: You always tell me, what I cook is good

Wonder who is better off? Me with my education and good manners or she with her practicality.

Here is a portrait of hers as she goes along her routine, am as candid as I can be, BUT when I share this image with her, she replies: you are a photographer you will take my picture, well aware I had Photographed her candidly.


Posted by RajatGhosh at 8:54 PM No comments:

On Friendship and things related to the heart

As I sit on nh33, at Giridhari dhaba, after having dug into Poori (flour tortious) and Daal (lentil and a jalebi (sweetmeat) my hunger quenched and a large glass of Tea in hand, 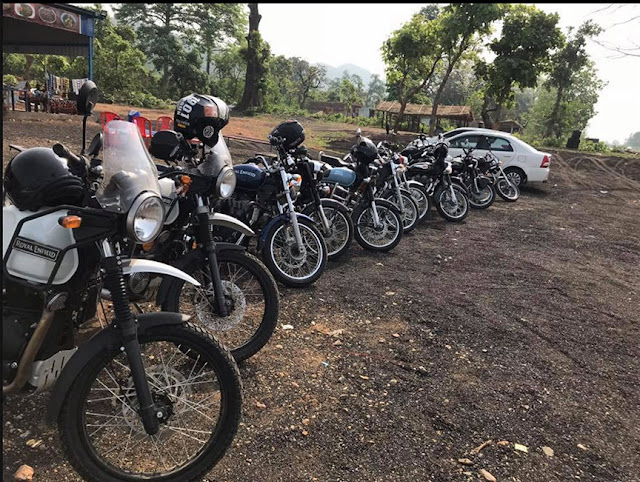 I remember meeting up at bikers house at 1145one night,  as one of the riders mom needed oxygen and he had asked for help, there were a good 12- 18 riders at his house with 3 cylinders of Oxygen making sure there was no calamity, cause they cared about there friend, Nothing to gain, but everything to give.

Since then I have bought electrical appliances from fridge/ AC, Bike all with help of these guys, My mother lives alone in Jamshedpur and because of my friends in this town ( who I refer to as my Human capital ) I can roam the world knowing all is well back home always

Thank you guys for being you. and Thank you Jamshedpur for bringing us together, 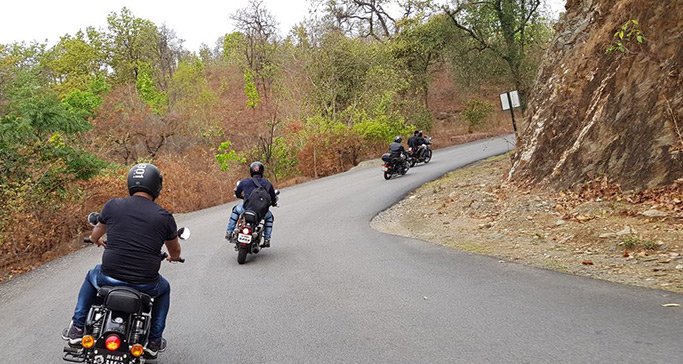 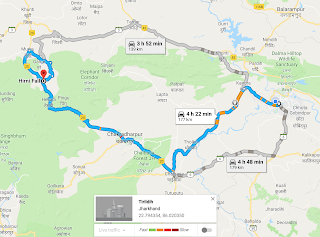 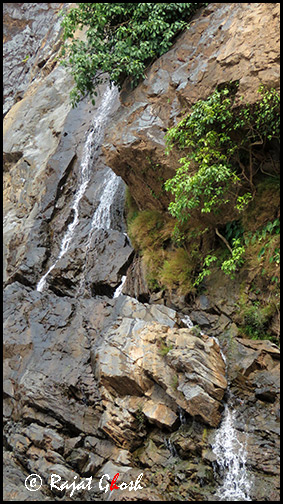 We planned a ride, after some discussions we zeroed in on Hirni falls, situated in Jharkhand, near chakradharpur, 140 km approx. from Jamshedpur, and with research we figured we could take a better road and stretch the ride to 180 km each way, it was a ride to celebrate “ One ride” a day when riders from all over the country indulged in a ride with there Enfield, and since the local dealer had not invited our club on a ride we decided it was on us to make it happen

7th  evening there was a thunderstorm, and a few riders fell ill from the rain and cold,  and of the expected 15 riders we had a few drop out, and on 7thMorning at 430 am, I was up and trying to see if anyone was on at all, no Reply, I was a surprised as no reply still by 0515 hours, After what-sapping the group and calling on the mod, finally it seemed like 3 of us were on for the ride, so I too geared up and was at the meeting point to find there would be 8 of us for the ride.

We had planned a 0545 departure but finally we were headed out by 0630 hours, 6 of us at the spot with 2 more to join us along the way, we headed out and was at Kandra 20 Km approx. from Jamshedpur, we reached Kandra, and after a round of tea and Aloo chop (a ball of potato that has been deep fried), we were joined by the other riders.

and we were ready to depart by 0700 hours, expected distance 150 km to go, Google had mentioned 4and half hours, and we headed out, good roads welcomed us for most part as we sped off, and next stop at chakradharpur 20 km past Chandil, where we had a bite to eat, breakfast as we were told there would be no food at the Hirni Falls location,  Dhosa , aloo paratha, samosa  were the choices, tummy full it was time to make sure the bikes were tanked up  we would probably not get a gas station for another 100 km, or more,  and then we were on our way to hirini falls, 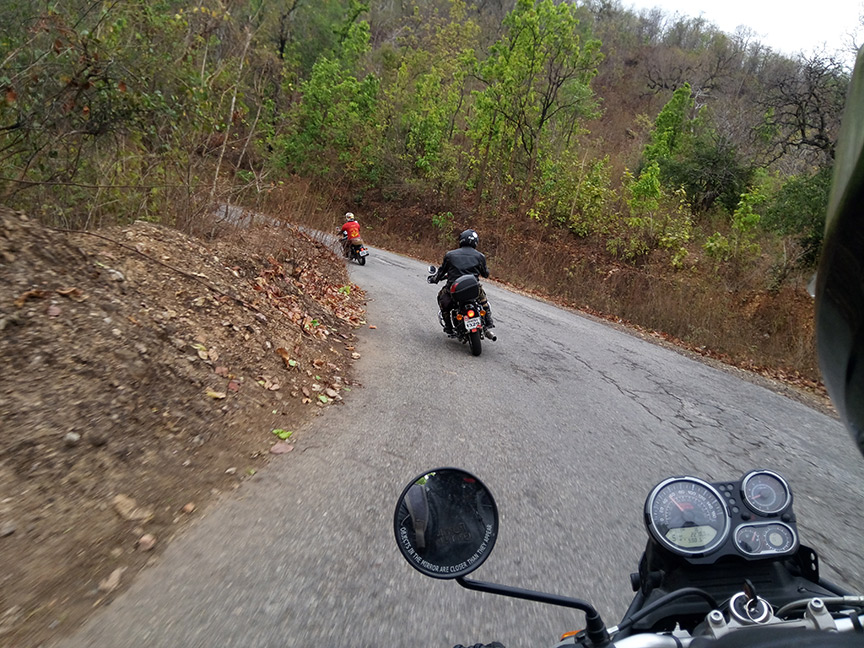 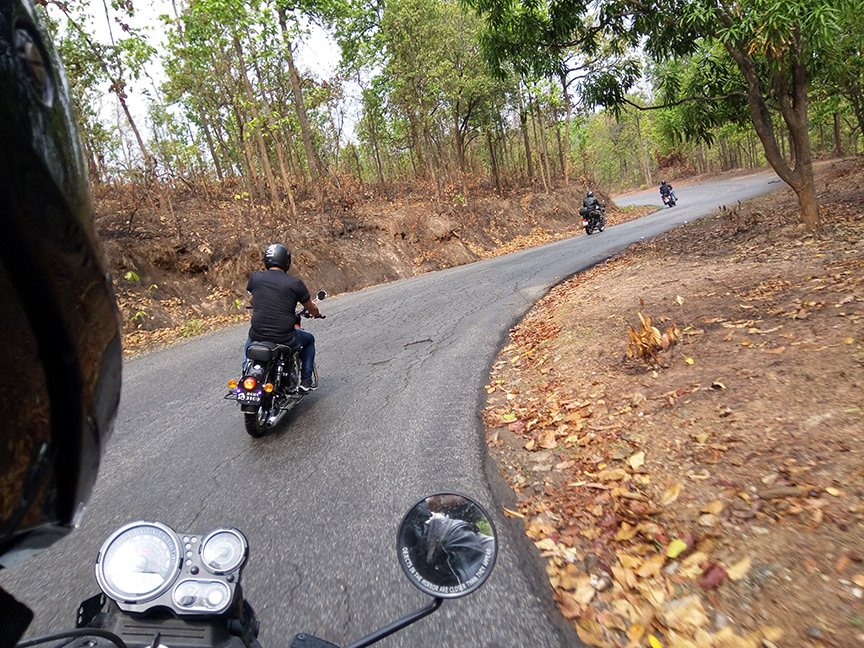 the last leg was 50 km approx., and we felt we reached too soon , the roads were good for most part, with some twisties it gets the bikers excited , this was no different as we raced up the mountains, n were at hirini n no time it felt like, 1000 hours we were at hirini and time to pull out the camera and get clicked 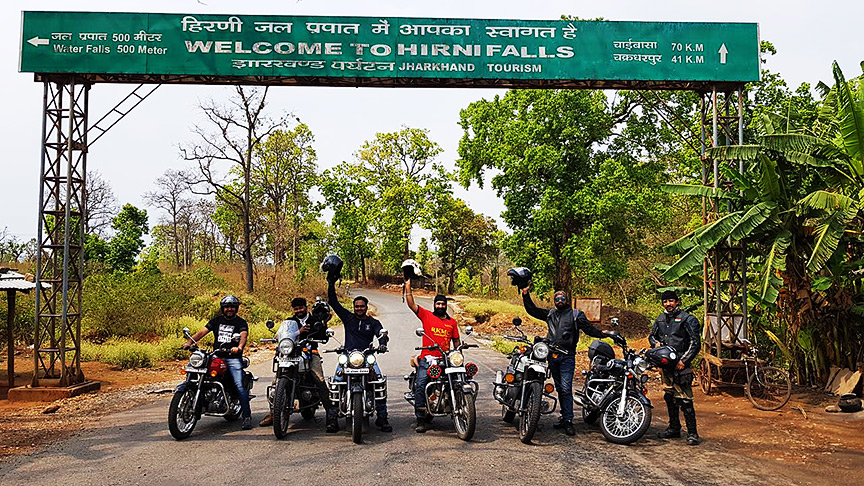 a few more feet to reach the destination they said, 700 meters to be exact 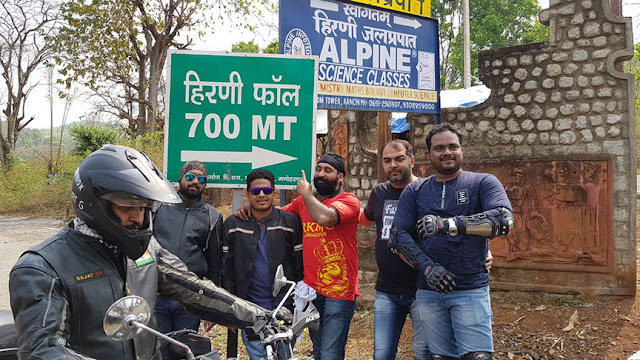 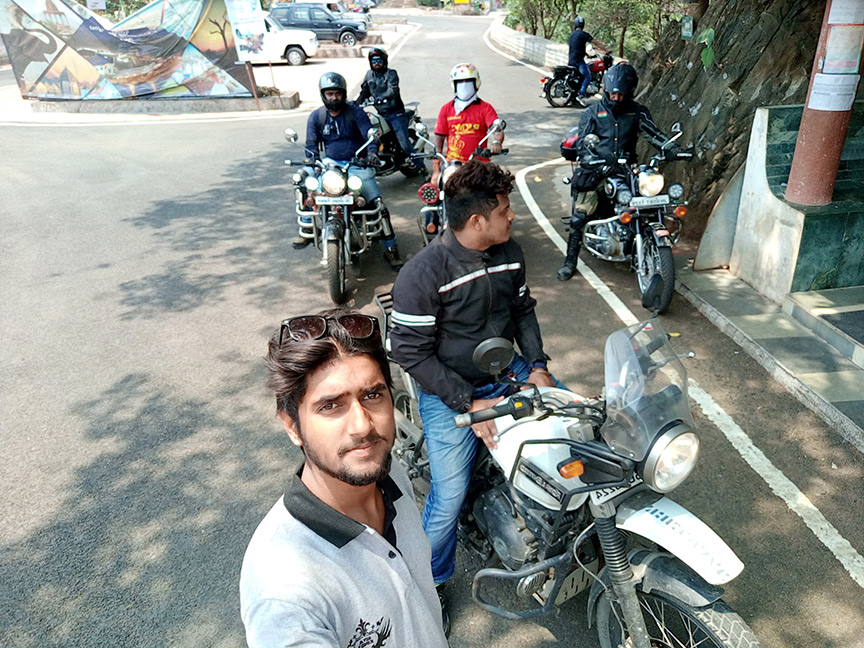 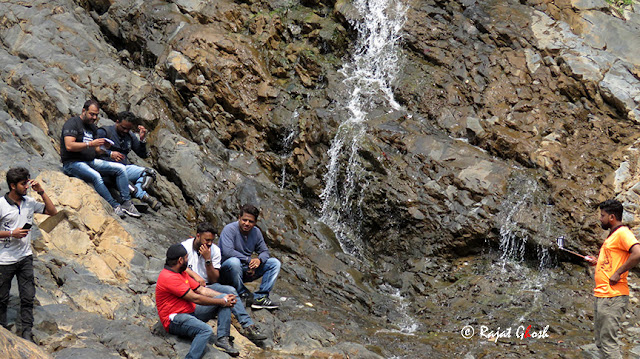 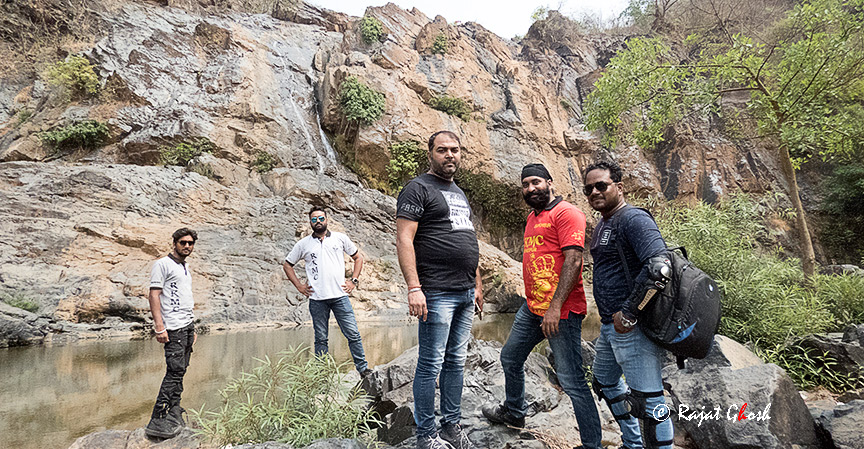 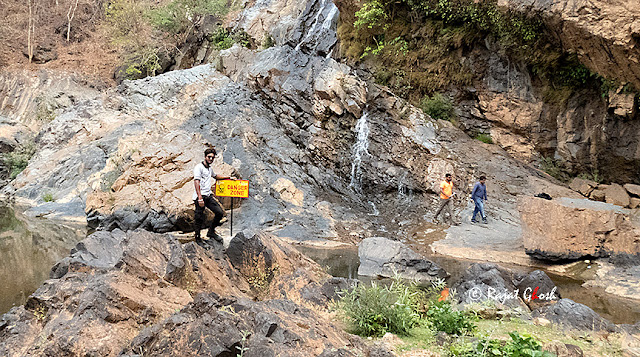 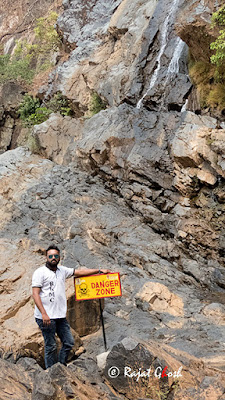 Once again a photo session was in progress 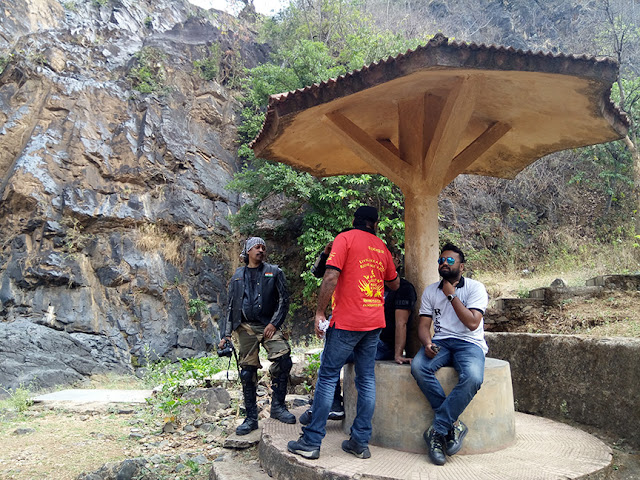 as we lounged around and enjoyed the scenes around us, it is April and not as hot that we suffer from the heat , we were approaching midday and doing quiet well, but we were keen to hit the roads again


1130 as the stomachs started to rumble it was time to head back, n another 180 km, saw us home, with a stop at Tamar for lunch, it was chicken and Roti and lassi, sorry we were too hungry to click pictures

Posted by RajatGhosh at 10:20 AM No comments: