1. Are they on camera or off camera

2. Into the Camera (as if speaking to the audience)

3. Real (you can see the person

4. Obscure – the person is in the shadow.

5. Talking heads (in the situation, sit down interviews)

6. Talking to the interviewer

Or saving frame because others will join his on sides as the shot continues.

Pull the person away from the wall, NOT against the wall, try to add the environment.

Think about sound, always a good idea to shoot twice at different locations with different actions. 1 calm and 1 with ambiance.

Always be sure you have 3 – 5 shots for a scene at least.

Ideally do not be operating camera when directing. Have eye contact with your subject as much as possible.

Operate camera only if you are in the fly in a wall scenario where you are not asking questions, in that situation also better to operate sound rather then Camera.

Different styles: the fog of war – use of jump cuts / canted framing, character shifted in position between shots

Forgotten dad – different interview style to tell the story, keeps one engaged, and creates an environment where one wants to know more.

THE con - by Morgan spurlock

Is investigative, personal style where he is involved shown as a character, info is shared by conversation

1000 Journals - using talking heads and showing situations that they are talking about.

Posted by RajatGhosh at 11:04 PM No comments:

Also always keep days together, and nights together.

The above 3 are the most important to keep in mind.

The other consideration s is:

4. Covered set – so in case of rain shoot can continue

5. Set VS Location while on set, Transport can be released

6. Continuity - its nice to be able to shoot in continuity

Every character has an S and an F.

Else hire talent on daily.

If talent has 10 days off between 2 shoot dates, do a drop and pick up, it is permissible only once.

Final week of shoot is prorated for talent, else you pay talent even for hold dates

You can drop a daily talent, but a weekly talent cant be dropped.

When shooting out of town an actors time is clocked from the time they are picked up in the hotel lobby to till they are dropped back , but for a local talent , the hours start when they appear on set, till they are asked to pack up.

Posted by RajatGhosh at 12:28 AM No comments: 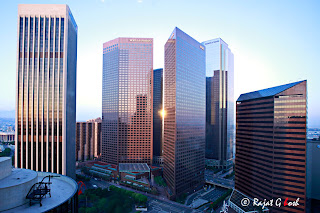 2 in a group,
One group is good; one group is bad, one main character and one sidekick.

There is a central theme, like the good group trying to save the world
While the bad group is trying to stop them from doing well.

Good group trying to stop the bad from painting graffiti on Eiffel tower,

There should be power transfer

Be committed to what you are playing.

3.  Start by making a noise, n then another person joins in , with a song or sound , n everybody keeps going  with the sound  or song all though till it becomes a full song

Posted by RajatGhosh at 10:53 PM No comments:

Proposal - document you submit to request funding from grant making agency's, which could be private or public 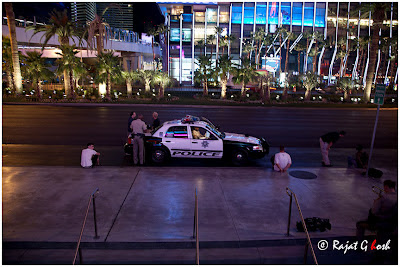 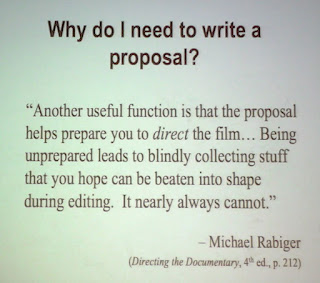 writing the proposal also makes it clear to oneself what one is embarking on, forcing a lot of clarity 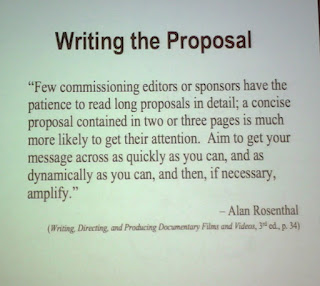 aim for simplicity , clarity and  in your proposal 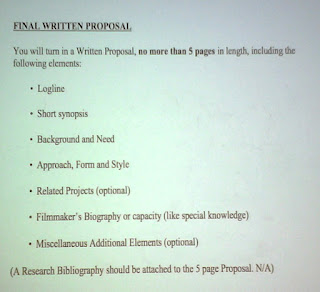 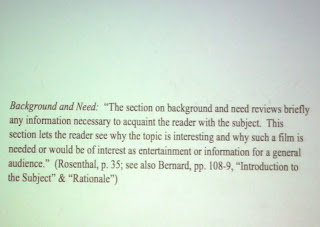 background deals with who is it aimed for ? within the project where is the film headed, bring the reader into the topic telling them about it , in context  of the reality and where it will go ,   will it interest people ? 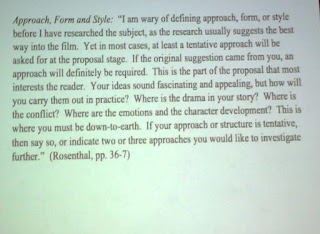 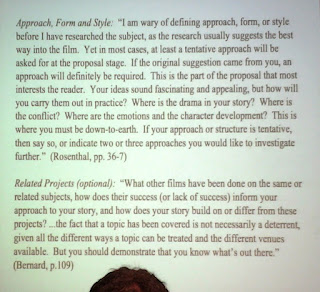 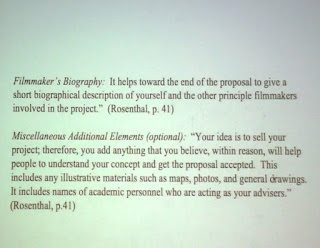 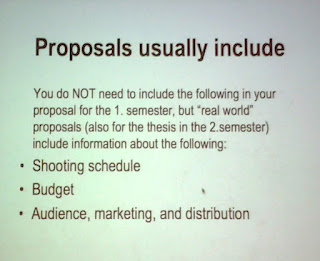 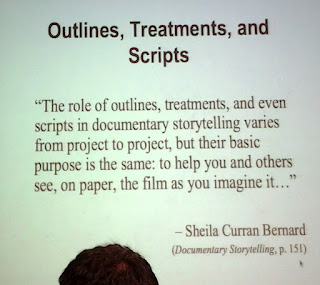 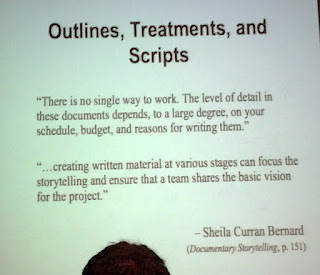 the 1st part of the above slide is for the producer
then it is for the crew the 2nd part, so they have an idea how the film is happening .
Team work is great , and if you are not getting where you want to , look as to what you might be doing wrong that you are failing and proposals are failing consistently 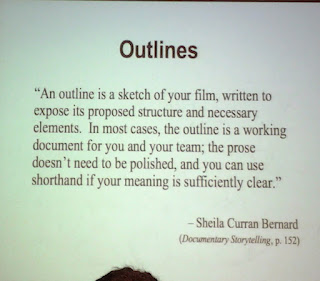 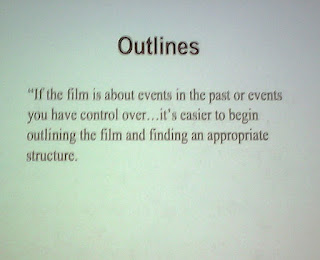 OUTLINES  between treatment and screenplay

how film develops , from storytelling what you need?  where the story starts and where it goes ? ( this is especially imp when working with broadcasters )    Plot points?  start, middle and end ?
Project your ideas , Describe the diff possibility if you are not sure how it ends

IT IS SIMILAR TO BEAT SHEET OF A FICTION

OUTLINE IS SCREENPLAY OF THE DOCUMENTRY FILM 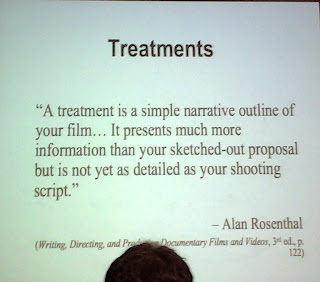 THIS IS NOT A REQUIRMENt , but is recommended as it is ones own safety net,  usually it is last stage of documentary pre prod ,  one describes the important scenes

its about how movie will start , the chronology of the scenes

eg a para about 1.  the barren land that is the desert
2. a family that is ling there
3. persons history
4. what is the conclusion that one is driving to ?

TREATMENT IS SCREENPLAY WITHOUT DIALOGUE OF FILM 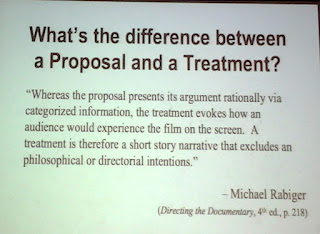 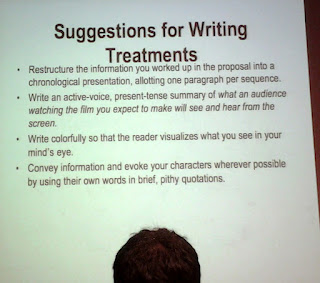 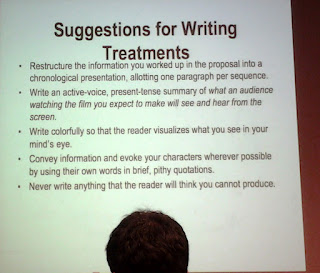 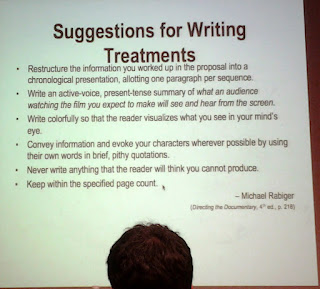 Posted by RajatGhosh at 12:43 PM No comments:

What do Directors expect of Actors?

Actors should make the character themselves

HOW TO GIVE NOTES:

Give reasons while giving notes, e.g. – go to door because you will be closing it later

GET ACTORS TO LIKE YOU
GET TO KNOW THE ACTORS
BUILD A RAPPORT
GET THEIR TRUST - tell them the truth
Listen to what actors say (actors are smart – they might bring something more to the shoot)
Make actors safe and comfortable - they should be able to explore there character, try there ideas and keep it open

BLOCKING - IT IS MOVEMENT OF ACTORS

Before the shoot the director should know about actor
What get them excited?
What makes them tick?
What angers them?
What triggers them to be in different state of emotions?
How the actor concentrates
What is the actor’s tequinique?
How do they get to where they get to?

DO NOT inundate actors with information, let them live it, be in the moment, give plain clear directions, NO LONG speeches
When suggesting changes give reason for change.

In this actor draws from

1-    Affected memory – actors will recall from there own past and use that to get to there emotion state
2-    They come from senses – touch / sight / hearing / seeing /.

To feel cold they will sit naked in an ac room.

CLASSICAL ACTORS:  SIMPLY TELL THESE ACTORS a situation and they will do it, it is an external process. The actor will observe there part characters, if one is a fireman in a movie, they will live with a fireman and in fire station for 2 weeks, and observe to act like them.

As a Director ask your actors what kind of actors they are, and then ask them how you can help them.

BE AWARE WHAT THE LINES ARE
WHAT IS THE SUBTEXT OF THE SCENE IS?

WHILE WORKING WITH CLASSICAL ACTORS - DESCRIBE THE situation, them do it, be precise with what you want,
With MA they will get there, so don’t give them too much directions,

For method actors you want them to get there by themselves,
For Classical tell them what you want.

HABIT - run through something like you normally do it.

BREAKFAST – FOR character actor tell them to savor the bfast
For method actors ack they to feel the place, mention their favorite breakfast, feel the place, and the smell and make the place special

ANIMAL - what actor will the actor be, and then go to zoo and watch and observe the animal.

FEELING  - THE EMOTIONAL STATE TO BE IN, N TO MAKE AUDIENCE FEEL

THINKING – ACTION TO GE THEM THINKNG

WORDS – WHAT THE ACTOR SAYS

IF A SCENE IS NOT WORKING ,  take the actors off the set and do IMPROVISATION SESSION  , to get them to to be aware of there lines but to just be themselves, get them to forget they are acting and become the part.

Searchlight – the co is still doing well, one of the last smaller co.

The bigger studios after they bought the smaller studios, like Weinstein, Miramax, could not sustain profits, n so they diversified into smaller studios – specialty studios
That failed too, n then they went straight to DVD
That is on the way out, or is out already and now they are looking at new media, and crowed funding.

NEGATIVE PICKUP  - (THE DISTRIBUTOR AGREES TO BUY THE FILM, BUT PRODUCER HAS TO FIND FINNACING AND MAKE THE MOVEI)
This is the most common way of financing

GOOD TRAITS OF A LINE PRODUCER?

People who report to LP is:
DP
Production manager (they have no creative input) manages MONEY
AD they take care of TIME

LP in turn reports to the PRODUCER AND STUDIO

TYPES OF PRODUCERS
EXEC Producer – they are involved with getting in part of the money
Producer – Controls the rights
Producers can’t be fired, they own the film

Line Producer is the one who closes most deals, for directors, scripts, actors and all else working with legal.

PROJECT IS GREEN LIT MEANS FINANCE IS IN PLACE, THERE IS SPENDABLE MONEY, CASH FLOW IS READY.

PHILOSOPHY OF PRODUVCTION - how the film should look how it should  “ look and feel “ e.g.  – should it be handheld, shallow depth of field,

-       REMEMBER THE STORY HAS TO BE FROM SOEMONES POINT OF VIEW

It has to be believable and serve the story, not necessarily slick, as much as make you feel the way the character is feeling.

Posted by RajatGhosh at 11:21 AM No comments: